How should we as Christians affirm transgender people?

Regarding trans people, should we as Christians affirm trans people who ask us to use different pronouns or different names? And what about transitioning, especially related to surgery?

​The main problem here lies with those of us who have been taught and socialized to believe the lie that God only created two genders: male and female. It is us cisgender* people who often cannot see trans and gender nonconforming/non-binary people as God has called them to be.

I believe that a “call” is an offering from God that we are given even before birth. If we live into them, our call helps us individually–as well as the whole of Creation–to have the best, most abundant life possible. Most Christians accept that in terms of career, but not nearly enough of us understand that to be about our desire, sexual orientation, and gender as well. Check out Psalms 139:13-15 for more on that.

I believe that those gifts too, are things to be discovered, explored, and in deep prayer about. And if someone in their deep knowing of themself realizes that they want us to use different names or pronouns; or that they feel more at home in their own body with a different hairstyle or clothing–or even that they need to alter their bodies so that we, as limited-sight beings in this society can see them and name them by who God calls them to be, then I say they should go for it with all our support.

Many people’s names in the Bible change when the have a significant life event: Matthew, Abraham, Sarah, Benjamin, Esther, Jacob, Peter and Paul, just to note a few. Sometimes it is God who chooses the new name, sometimes people. In Matthew 19:12, Jesus mentions that eunuchs (a group of people whose gender doesn’t fit neatly into into the gender binary) as arriving at that identity either from birth or from intentional surgery.

So when we look down on others who are outside that mythical gender binary, we often act out of a place of fear that we, ourselves, might not be masculine or feminine or Christian or pure or good enough to earn God’s love and society’s approval. Watch out for that!

I believe God knows us in our innermost beings and delights in our discovery of the treasures and truth that we hold inside as gifts from the Divine (and I don’t think that “man” or “woman” is the only answers God is looking for). We all contain a beautiful cornucopia of traits of all different types and flavors, and I know that God can hold us in all of our complexity, and delights in it, in fact.

God is right there with us when we need to change what the outside world sees in order to be more congruent with the names that God already calls us… mostly, Precious, Beloved One.

*Cis-gender can mean one whose experience of their own gender is more-or-less aligned with the gender they were assigned at birth.

How should we as Christians affirm transgender people?

How can I begin affirming my sexuality as a queer woman while obeying God’s commands?

What is the concept of chosen family?

What’s the significance behind the annotation of “G-d”?

How does your queer faith differ from heterosexual Christians?

How do I reconcile my sex drive with God's commandments for me? 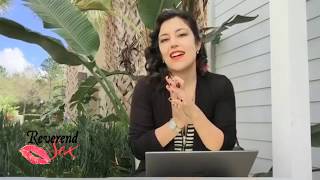 VIDEO: My mother prays for the end of my queer relationship.